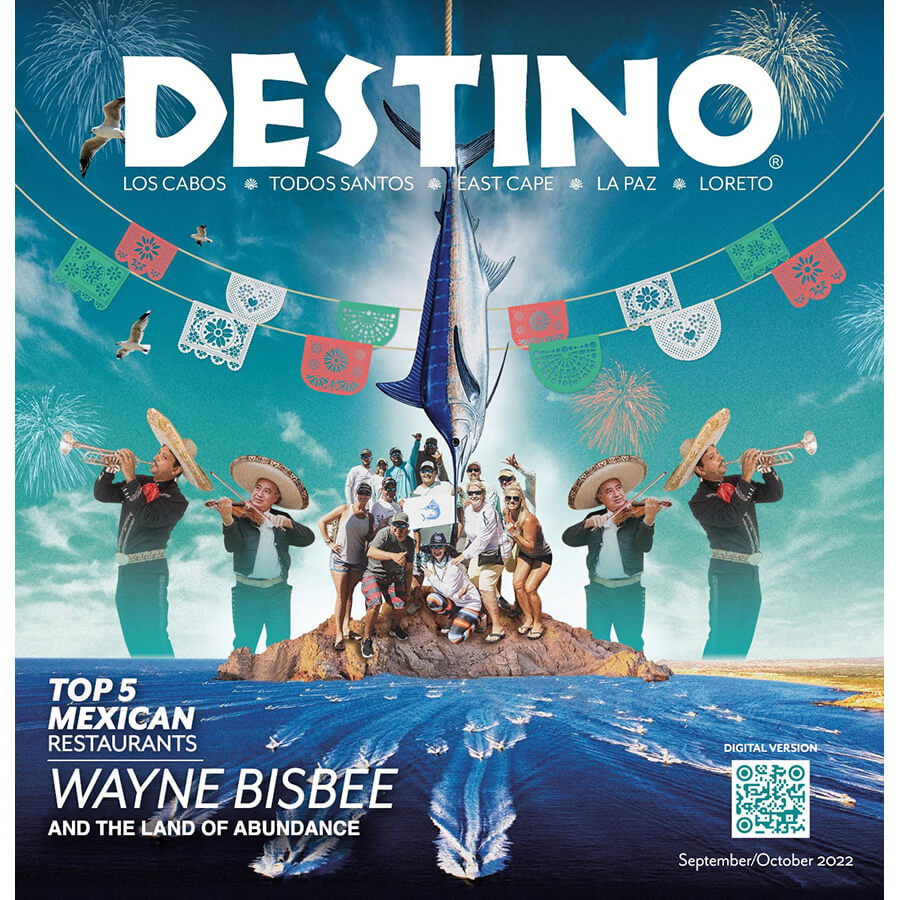 Here we are two years plus from the beginning of the pandemic that literally changed the world.  There remains a pent up demand for travel but now the emphasis is on experiential travel.  Los Cabos has always been a haven for the affluent traveler.  There is one 5 star large box branded hotel after the other spanning from Puerto Los Cabos on the Northeast to the Rancho San Lucas on the Southwest with all of the luxury trapping such a marinas, golf, restaurants and shopping.

Even with Europe open for travel, Los Cabos received 1,125,000.00 travelers between January and June of this year.  That’s a 51% increase over last year, according to Rodrigo Esponda, Director General @loscabostourism.  During this explosion of construction and tourism down south, just one hour north on the Pacific, the little pueblos of El Pescadero and Todos Santos have quietly been expanding but in a way that takes into consideration the environment and keeping the true natural essence of the area in tact.  This natural essence is the draw and the key differentiator to this very special area.  Not only do El Pescadero and Todos Santos share two of the best micro climates in the world, they’re both know as agrarian areas, known for their prolific year-round organic produce and natural beauty.  Not only has this drawn tourism to the region but many people are leaving the USA, Canada, mainland Mexico and even Los Cabos for the slower, less congested vibe the areas afford.

The drive on the divided 4 lane toll roll takes you by rolling pampas of Cardon forests, the foothills of the Sierra de la Laguna mountains, and of course, the majestic Pacific.  It’s normally a no reception zone for wifi and calls so taking in the natural beauty is akin to a mediation session.

El Pescadero remained an agricultural region until Chip Conley built his Modern Elder Academy under the auspice of learning how to navigate midlife and beyond.  Yes, there is life after retirement in a rocking chair.  Chip has proven repeatedly in his Baja Workshops or Sabbatical Sessions at MEA, that being 50+ is very empowering.  Those attending typically have fallen in love, and what’s not to love about picking organic produce to make lunch, meditation session on the beach, hiking Punta Lobos and learning to expand one’s mind, to the point of purchasing land and building McMansions in the area.  Prior to MEA, a 20 acre former exotic plant nursery on the ocean, known as King Ranch, was the only luxury enclave.  Palm Orchard sold out during the pandemic.  Two lots south of Rancho Pescadero is one of the few remaining oceanfront lots in Pescadero, a 3564m2 (almost an acre) for 2.5M.

Compare this oceanfront lot in an oceanfront off-grid gated community a couple of miles to the south of Cerritos known as Rancho Nuevo where you can get an oceanfront home on 3000m2 (3/4 acre) complete with pool, oversized garage and guest casita for 1.9M.

Just up the “Baja Beans” road, we have no official road names so they’re nicknamed, El Perdido and it’s creator, Polo Perez, wanted to create something where his guests could “get lost”, hence the name “El Perdido”. Losing the familiar, losing the stress of work, family, and everyday life is their credo. I love it’s red neon sign on the edge of a dusty dirt road “Coyote”, the incredible restaurant run by Victor Tafoya.  With just 7 rooms, with all the creature comforts, this represents the epitome of getting away or as their signs reads “you are lost”.

Behind El Perdido and Coyote, is Siempre Viva, a recently opened farm to table restaurant, known for it’s organic produce grown on site on it’s 9 acre magnificent farm.  The chef, Juan Manuel Tapia, is from Argentina and the proprietors are not foreign to restaurants having had several successful restaurants in Los Cabos.  It’s took Keisha Valdes and her family 5 years just to nurture the farm to sustain a restaurant.  During that time, she sold co-op boxes and provided produce to Cabo restaurants.  If you love delicious organic fare in the middle of nature, this is your spot. It’s a slice of heaven on Earth. Nearby, you can create your own farm to table or intentional development on a 4.8hectare (almost 11 acres) for 1.95M.

Before we leave El Pescadero, I’d be remiss if not mentioning the most anticipated project, with a soft-opening October 13,  Rancho Pescadero. Situated on a sprawling oceanfront 30 acres will be 103 handcrafted rooms all outfitted by Mexican artisans. Getting there is off the paved four lane on to a dusty rambling dirt road.  The wonderment of arriving such a luxury haven after that driving experience adds to the allure of the property.

Rancho Pescadero painstakingly marked every desert plant with GPS and moved it to a nursery to care for during the construction of the 12 oceanfront villas with private pools before replacing each and every plant in its exact original location. Of the 103 keys, 96% have ocean views, 23 have private plunge pools, 20 rooms have rooftop decks.  There are nine interconnected gardens with indigenous plants to attract the birds, bees. The Botánica garden restaurant incorporates local organic produce.  Centro Café offers an all day menu for those choosing to enjoy the two swimming pools. Kahal will be the most luxurious restaurant on the coast.  Incorporated into the setting is a curved infinity pool, the restaurant is decorated to resemble the interior of a seashell.

No 5 star resort would be complete without a spa and Botanica’s 25, 000 square feet spa and wellness center focus on transforming you into a sacred peace of mind and body.  There will be an outdoor water feature resembling a cenote, the apothecary invites guests to choose their own wellness formulas. There’s a hydrotherapy circuit, complete with ice fountain, steam and “experience” showers along with a Himalayan salt sauna.  Treatment rooms are known as nests in which to be coddled. There are two yoga Shalas and a Pilates reformer studio.  An Olympic sized lap pool complements the spa and for the sports enthusiasts, there are Pickleball courts, TRX machines.

What sets Rancho Pescadero apart from its five star competitors in Los Cabos is the amount of green space and attention to sustainability.  There is a zero plastics policy, dark sky lighting will be used.  A gray water recycling system will irrigate the landscaped grounds.  A desal plant, while a necessity, is being augmented by a water bottling plants. Only electric carts and bicycles will be used throughout the property.  In the works is a solar farm, making it the only totally sustainable resort in all of Baja California Sur.

Heading east on the unnamed dirt road we call “Rancho Pescadero” road take us to the now divided paved highway in El Pescadero.  Heading north, you’ll pass Agricole, what used to be a small farm to market store with artisanal breads.  Recently, expanded and to be franchised, this parking lot is always packed for it’s great coffee, bakeries, wines and produce along with it’s new eatery.

Not too far north from Agricole, in the middle of agricultural fields, lies Paradero, which feels as though it was sprung from the Earth.  The 35 austere suites are intentionally done to get guests out on curated experiences.  Renowned architect, Frida Escobedo, will be adding 26 residences to Paradero in a most creative setting.

As we continue our trek north, we come across the incredibly popular Hotel San Cristobal, located next to Punta Lobos fisherman’s beach.  This 32 room resort enjoys a very high level of occupancy in a most unique setting.  It was named in honor of Saint Christopher, the patron of travelers.  Benno is a popular eatery and having a cocktail whilst watching the fisherman coming in with the catch of the day is always a highlight. It’s a cool vibe with the most picturesque vistas.

Soon on our journey north, we arrive Todos Santos. We see the typical rambling palapa roofed shops until we come to the dead end and turn right on Ave. Juarez.  A rather imposing edifice, on the grounds of a former sugar cane mill, called Santa Terra, is the creation of Gaby and Netto Copell.  This building houses retail, art galleries, some pop-up, and meandering gardens behind all the way into the palm oasis or callejon. There are plans for more development so stay tuned for the updates. On the other side of this palm oasis, one can purchase the epitome of Todos Santos living in Casa La Cachora, complete with a massive palapa roof, tiered living, dining and swimming pool.  The only sounds you’ll hear are the clanging of cow bells, rustling of palm leafs, surf and the many song birds. 1.2M.

Though the hotel is closed (restaurant and shops open) Hotel California remains an icon for a photo opportunity in Todos Santos.

Just over two years, Rancho Corazon, just a tad north of downtown on Centenario, opened Dūm Restaurant in the palm oasis. This venue and restaurant is an experience for all senses.  Chef Aurelien Legeay creates a prix fixe menu that changes weekly based on what is available locally.  The vibe is very laid back European, where lunches and dinners linger for hours.

Much construction, mainly homes, but some retail continue to as we head to “El Otro Lado” (the other side) where most expats live. One in particular was designed by the popular retail store “Nomad Chic” owner in the center of Todos Santos known for their fashionable attire and home decor.  Casa Linda is a sprawling 3 bedroom contemporary estate on one acre located in tony Las Tunas for 1.4M. Just to illustrate the luxury of space, Casa Curva, another contemporary estate by the sea is on 17, 400m2 (4.25 acres) with 3 bedrooms housed in 3 separate residences with an Olympic size swimming pool for 4M.

Once the paved “Playitas” road ends, the road running parallel with the Pacific, we encounter Villa Santa Cruz.  This is home of the famous feet in the sand “Green Room restaurant.  Situated on 20 oceanfront acres, this is one of the most stunning settings for a hotel.  The main/original hotel consists of 4 rooms in a beautiful ochre colored colonial building.  Later 4 pool villas were added, flanking the inviting pool and Jacuzzi.  There a 4 luxury beachfront tents, complete with A/C and soaking tubs and finally a 3 bedroom villa on the south side of the property.  A beautiful organic garden beckons guests to forage and have the restaurant prepare a custom dish. Before dinner or during the afternoon, enjoy a cocktail in the cozy “Lounge” adjacent to the main hotel.

North of La Pastora, where Villa Santa Cruz resides are multiple hotel developments underway.
If you’re seeking the antithesis of Los Cabos but still want the beaches and natural beauty of Baja, come up and take a walk on the wild side.”